April 30th: Getting Away From it All…

There are always chores to do at our house and Jon was power washing the deck furiously yesterday, as well as doing laundry and getting rid of shit from the garage (amen!) and we were headed down the same path today, but instead we dropped everything to see the Matisse-Diebenkorn exhibit at SFMOMA. We hadn’t been there since SFMOMA had been enlarged, so it was high time.

The weather was absolutely glorious– when a day in San Francisco makes you feel like you have died and gone to heaven were it not for the occasional whiff of urine, pot, and several deranged homeless people who were yelling their demons away. My. Everyone seems angry these days.

The exhibit was very well organized, with Matisse paintings hanging alongside Diebenkorns, showing the strong influence Matisse had had on Diebenkorn and then Diebenkorn reminded me of Wayne Thiebaud, and so and so forth. Not so much the Anxiety of Influence but a healthy cross-fertilization: taking someone else’s cue, appropriating it without straight copying and making it new again. 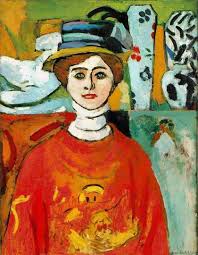 The kids had seen that one for years and then when we wandered into SFMOMA one day and saw the original, Will’s jaw dropped to the floor after which he came running to me and said: “Mom, mommy, they have YOUR painting!”

If only we had that painting for real– we could probably have financed our entire house remodel with it.

And I really should have taken a picture when I went to the bathroom because when I walked in there, I felt I stepped inside someone’s womb because the entire ladies’ room was painted red, from floor to ceiling, to stalls. Very trippy. I was somewhat tempted to take a peek inside the men’s but decided against it.

The day was meant as a day away from Henry Miller, but life works in mysterious ways because when we entered the sculpture garden, we saw this: 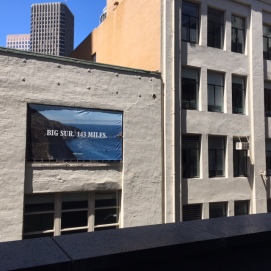 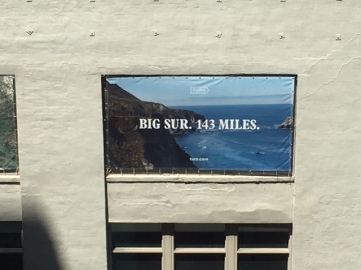 Turns out, this is some smart advertising from a rental car company, a sharing economy outfit, for at this company people rent out their own cars. You can rent a convertible Fiat, a Tesla, you name it. Next time. Maybe we’ll drive to Big Sur and back.

Hope your Sunday was equally fun. Good luck with the Monday. And don’t forget to smell the roses.

This entry was posted in Uncategorized. Bookmark the permalink.
Book Oblivion

Not Very Good at Anything
Spending Time with Henry Miller

"If we have not found heaven within, it is a certainty we will not find it without." ~ Henry Miller

a showcase of three novels and one memoir in progress